I noticed, at a parents’ meeting at a Christian school the other night, that one of the Moms, who was in charge of one of the projects, was slurring her words ever so slightly. I went up to her later to ask her a question and was hit with a miasma of alcohol breath.

And so I judged her.

Because, you know, she’s supposed to be a CHRISTIAN. And she’s in LEADERSHIP.  So she shouldn’t be drinking ALCOHOL.

I kept judging her for a good five minutes, until I remembered that I too had had a drink that afternoon

Granted, mine was probably not enough alcohol to register on my breath and was hours before I had to drive to the meeting.

So not really the same thing.

So totally the same thing.

The only difference between her drink and mine was the timing. So okay, maybe I had the sense to not show up to a parent meeting with alcohol on my breath.

Maybe all that means is that I’m better at hiding it.

So what’s with the judgment, Muffy?

I seriously never cease to amaze myself. Apparently, in Muffy Land, it’s okay for ME to drink, and it’s okay for my friends to drink if they’re with me, but no other Christians are supposed to imbibe. 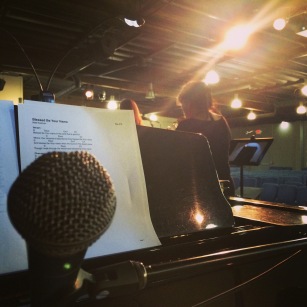 I’m singing at a songwriters showcase this weekend. I gave up on my music about five years ago when I got shut down one time too many by my pastor.  I stopped taking his remarks to heart after he was asked to step down from his position, but I had lost heart at that point and decided I should just stop singing my songs despite the encouragement of others.

And then I was asked to join this show this weekend, so I dusted off some songs. They are very dusty. But I’m doing it anyway. I’m not sure why, and I don’t expect anything to come out of it other than the enjoyment of sharing my music. So maybe it will be a good thing. My husband is backing me with his guitar so that will be nice.

But I’m still scratching my head. I thought I put that era behind me. I thought I was focusing elsewhere. Maybe there’s some music still in me.

Who knows, I might even start writing songs again

I took my youngest to his diabetes doctor today for his quarterly check-up. I spent most of the appointment playing Candy Crush Soda Saga on my phone.

Sure, it’s routine by now, having just passed his four year anniversary. Sure, I’m trying to stay out of  the way and let the doctor talk to him not me.

But still. The whole appointment, I was playing that game. I was listening, granted.  But I was focused elsewhere.

Which leads me to believe that this diabetes stuff is one thing too many for Muffy to cope with, so I have simply checked out.

Which may be understandable, but it’s not okay.

It’s SO not okay.

So I should check back in. I would, if I could figure out what’s stopping me.

And finally, when you try to be the Mom Barista in the morning, it’s really hard if you haven’t made your own coffee first.

Case in point: yesterday I made the coffee twice and my son’s cup of tea three times, because I kept messing it up and having to start over.

This is why, people, they tell you to put your oxygen mask on first before helping the person next to you, in the case of depressurization on a plane.

What?  It’s totally the same type of thing.