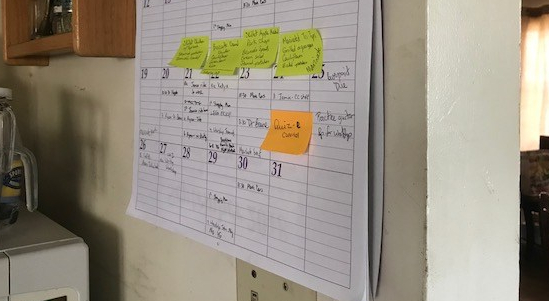 So my new adventure of working part time and taking online classes and suddenly having plenty of money to pay the bills with, that adventure? Yeah, it’s not actually working out that way.

I feel a little foolish because if it was me reading this, I’d be nodding sagely and murmuring, “Yep, saw that coming.”

But seriously.  No one wants to hire me.  Even the jobs where I am an actual shoe-in, like tutoring or teaching English online, even THOSE jobs don’t want me.

Well, that’s not completely accurate.  I did actually get a job offer for a very respectable job with a nationwide healthcare company.  I got it two hours after the interview, so they must have liked me.  The only problem there is that they advertised it as part time and the job they offered me was full time, so I had to turn it down.

A couple of weeks ago I was in prayer – okay, no, I was on my knees begging desperately for the Lord to send me a job because we’re now in debt and we need the income and oh Lord who is going to pay for the insulin and on and on…

(NB: My husband’s insurance covers the insulin and all the supplies for my son’s insulin pump, so that was actually just me being hysterical. I have been known in the past, once or twice, to resort to hyperbole when I’m trying to make a point. Or maybe a couple of hundred times.)

Once I had calmed down, I thought over what it is I am doing with my days.  Why couldn’t I have accepted that full time job after all?  A quick glance at the calendar showed me doctor appointments 2-4 times a week; I was taking care not just of my own medical visits but also my son’s, my mother’s and both my daughters. I’m the only driver in this group because the one daughter who does have a driver’s license has had to stop driving temporarily due to a concussion.  So I’ve been busy.

Added to that is my friend who is moving house, who has a special needs son and a narcissistic husband who also has addiction issues, and whose best friend is dying of cancer and whose other friend just moved halfway across the country, which leaves me to help pack, debrief, listen to venting, reassure that “Yes, you really are not the crazy one in that situation” and occasionally give rides to the son.

I’m also taking the classes as planned, so there’s homework every day.

And I’m trying to undo the household damage of five years of Mom being too busy to spring clean and kids investing more in excuses than chores.

So okay, I’ve been REALLY busy.  Unfortunately, none of that comes with a paycheck.

So I said all this to the Lord. (Because, you know, if I don’t tell Him this stuff, how would he know….)

I felt like He was asking me if I’m willing to stop doing all those things.  I’m not.  I can’t. If I don’t do these things, there is literally no one else to do them.  He pointed out that all of those things are way more important than money.  I reminded him that I have bills to pay.  And then I felt this overwhelming peace, like He was saying, “I’ll pay the bills – you take care of my people.”

That felt completely counter to what a Good Responsible Adult should do.  So I gave it a week and then revisited it (in the meantime, I applied for about 15 jobs, none of which gave me a call-back).  I felt it again, stronger than ever.  “You work for My Kingdom, I’ll pay the bills.”

So I surrendered.  I unsubscribed from all my job posting websites and took them off my start page on my browser.

Last week was the first week “officially” working for the Lord (because although I’ve actually been doing it for weeks this was the first one where I was aware of what I was doing).  Midway through the week I got a call from a friend asking me if I could proof a 12-page document for his business.   I spent about two hours going back and forth with him and he paid me the going rate.  It wasn’t a full week’s salary, of course, but it was better than nothing.

And then a few days later my husband’s mother dropped by out of the blue and handed us some cash, saying she just wanted to help us out.

The total of the cash plus the proofing job was about $20 more than I would have netted for the week if I had worked a part time job at the rate I had been aiming for.

I was elated and couldn’t wait for this week to start.  On Sunday I prayed, “Lord, show me what You want me to do this week – who can I reach out to in Your name?  Who can I minister to?”

By Monday morning my calendar was full: doctor appointments, rides for the special needs friend, coffee date with a long-neglected neighbor, a meeting with the friend who has taken over my teaching position, people dropping by to pick up things my son was selling. I was ready to go.

So here we are on Tuesday.  Halfway through the morning I got an email from a temp agency I had applied to months before, looking for a temporary or part time position. They were asking me to “help them out” and take a part time position for much less per hour than I had said was my lower limit. On top of that, the position was not temporary and “might grow to full time.” Maybe if it had come on Monday, I would have simply rolled my eyes and declined it, but today was Tuesday and I’d already had time to worry while driving across town and back.  I’d already had time to question why it is that I’m doing care-giving when that was the one job I said I wouldn’t apply for, so this job offer almost looked attractive.

I still turned it down, because a glance at the calendar showed me I actually did not have time to do it for at least a month, but then I got sad about it. It felt wrong to turn down a job offer.  I was supposed to be working some nice, quiet little office job and then coming home and doing school.  I had had this all planned out and instead I’m driving people all over town every day and dealing with difficult issues in their lives and advocating for them with doctors and insurance companies and trying to strategize ways to give advice to them without being overbearing and firm without being stupidly legalistic.

So I told the Lord this, in case He hadn’t noticed.  I told Him that I didn’t like the job He had given me to do.  I had wanted a less challenging job that involved working in areas where I shine, like typing fast and writing things and making spreadsheets. This job is tapping into all the areas where I feel weak and unprepared and it isn’t fun like the other one was supposed to be.

And then I listened to myself.  I let a few tears fall and then apologized to Him and asked for forgiveness for offering myself to serve Him and then pouting about it when He took me up on it.

And I felt like He smiled at me and said, “Good. I have you exactly where I want you.”

…we rejoice in our sufferings, knowing that suffering produces endurance, and endurance produces character, and character produces hope, and hope does not put us to shame, because God’s love has been poured into our hearts through the Holy Spirit who has been given to us.  [Rom 5:3-5 ESV]

4 thoughts on “When You Get What You Ask For”